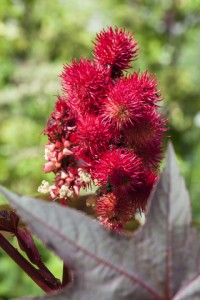 Castor oil is a natural oil which is produced by pressing the seeds of the castor plant, which is also known as the ricinus communis. Castor oil is used for many different purposes today, including the production of plastics, lubrication, cosmetic treatments, anti-fungal medications, and even laxative treatments.

Castor oil is recognized by the US FDA as being a “generally recognized as safe and effective” laxative which can be sold as an over the counter medication.

Castor oil is an effective laxative because it contains Ricinoleic acid. This acts on the small intestine to produce the laxative effect. Ricinoleic acid is also known as 12-hydroxy-9-cis-octadecenoic acid. it is an unsaturated omega-9 fatty acid which is known to have anti-inflammatory and analgesic effects, as well as working as a laxative.

Unlike many synthetic laxatives which work by softening stools, castor oil is a natural laxative which lubricates your bowels without absorbing moisture from inside the walls of your intestives. Castor oil helps to remove fecal matter and cleanse your intestines, and is a useful treatment for occasional constipation.

Castor oil is a safe and natural treatment for constipation. You can take castor oil neat or mix it with some juice to mask the taste if you feel that it is unpleasant. Castor oil is not supposed to be used on a regular basis, so you should seek advice from a doctor if you experience frequent or long-lasting constipation, but for occasional problems with your bowels it is perfectly safe to use.

Castor oil laxative treatments can be taken on a spoon, or mixed with a drink. If your doctor or another health care professional has prescribed castor oil laxative dosage then you should follow their directions. However, if you are using castor oil as a laxative home treatment then a good rule of thumb is that an adult should take one teaspoon per dose, and a child should take half a teaspoon.

Castor oil should be taken once per day, for three to seven days. It is a good idea to take it first thing in the morning, before you have breakfast. Castor oil is most effective when taken on an empty stomach. The oil can taste quite bitter, so you may want to mix it into food or orange juice before giving it to a child. Castor oil should only be mixed with cranberry, prune, orange or ginger juice. Do not mix it with artificial fruit juices, because these may contain acids or other ingredients that can damage the ricinoleic acid in the juice, preventing it from having a strong laxative effect.

When purchasing castor oil, make sure that the variety your are buying is designed for human consumption. Natural castor oil is pale or light yellow in colour, and has been cold pressed. Some department stores sell industrial castor oil, which is not designed to be ingested, and could be harmful to you. It is safest to buy castor oil from a pharmacy or a health food shop, rather than a general store.